In history, names of wars and eras can be downright confusing. Or in this case misleading. The Korean War which was fought during the “Cold War” is a main example. There was nothing “cold” about 2 million lives lost in a 3 year period between 1950 and 1953. This was a hot war in the cold war era. And although the war was fought on Korean soil and many Koreans died, the biggest armies were in fact Chinese and American.

What is even scarier is that technically, the war is still ongoing although no shot has been fired in more than half a century.  So, to continue that train of thought, if you are a US citizen you are (somewhat) at war with China. I dare you to go to the North Korean border, dress up as an Allied soldier and throw a stone…  That might ruin a perfectly good day.

But I digress. In the Second World War, Korea was occupied by the Japanese. Since they had to capitulate in 1945, Korea was split in half at the 38th parallel and occupied by the Soviet Union (North) and the US (South). South Korea was led by fierce anti-communist Syngman Rhee and North Korea was led by communist president Kim Il-sung. Both were strong and ruthless and both wanted a unified Korea. Well, this couldn’t possibly end well, could it? Once the occupation by the Soviets and the US ended and Korea was on its own, Kim Il-sung thought it a good idea to invade the South. So in 1950 he did. 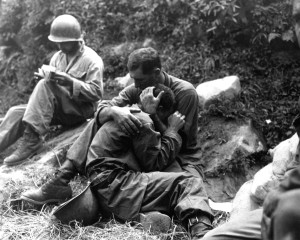 The South Koreans were completely taken by surprise and successfully asked the UN (i.e. the US and a few troops from other countries) for help. Perhaps they should have asked a little faster, because at one point in the war, all the UN Forces were cornered in a 50×50 mile sector around the city of Pusan in the very south of Korea. North Korea had overrun the entire peninsula.

Enter General Douglas MacArthur, a celebrated World War 2 general who was called to take care of this mess. He launched a counter attack close to the 38th parallel at the city of Inchon. So now there were 2 small spots on which the UN forces held some ground in South Korea. Thanks to great strategy and overwhelming firepower, the UN was then able to push the North Koreans completely out of South Korea. This was not enough for MacArthur. He wanted the entire communist Korea gone and charged North. Since North Korea bordered to communist China, the Chinese leader Mao got worried and launched a counter attack with 1.3 million soldiers. The UN forces altogether had about 900’000. So now it was firepower and technology against human wave tactics. And yes, on the side of the Chinese the term “cannon fodder” was very accurate.

Eventually, both sides ended up where they started, at the 38th parallel. In between all that, US president Harry Truman had to fire General MacArthur and replace him with the more reasonable Matthew Ridgway. The extremely intelligent, but big-headed MacArthur wanted to attack China on its own soil, maybe even with Nuclear weapons (!!!) and Truman wanted to avoid World War 3. Well, thanks Harry!

Unfortunately for all the people who lost their lives during the time of negotiations, it took them 2 years to come to an agreement and armistice.  So here we were, it’s 1953 and nothing has changed on the map. But millions of lives were lost for nothing.  And what is even more worrisome is the fact that it can still break out again today. It’s just an armistice. Now that was and is a useless war.

Hanhimäki, Jussi M., and Odd Arne. Westad. “The Korean War and the Sino-Soviet Alliance.” The Cold War a History in Documents and Eyewitness Accounts. Oxford: Oxford UP, 2004. 176-79. Print.