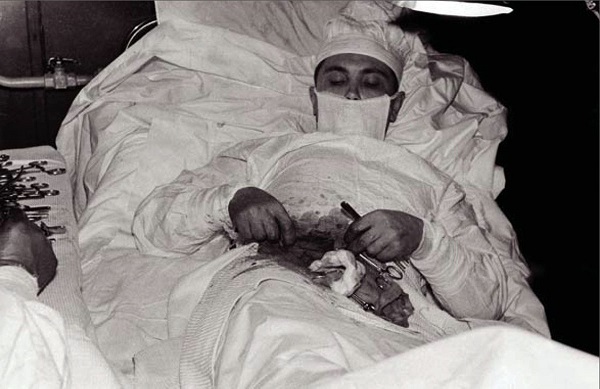 Leonid Rogozov (1934-2000) was a Russian general practitioner who participated in a Soviet expedition in Antarctica in 1960. In April of 1961, he began to feel unwell and eventually came to the conclusion that he had an inflammation in his appendix.

Unfortunately for him, he was the only doctor in his team of 13 researchers and the nearest Soviet research station was 1,600 km (1,000 mi) away. Furthermore, the weather conditions were not helping either: A blizzard made it impossible for planes to land. Out of despair, Rogozov decided to perform an appendectomy (i.e. removal of the appendix) on himself while fully awake. Two of his colleagues assisted him during the task. He was so weak that he had to take several breaks, but nevertheless completed the operation successfully and lived on to become a successful MD in Russia.