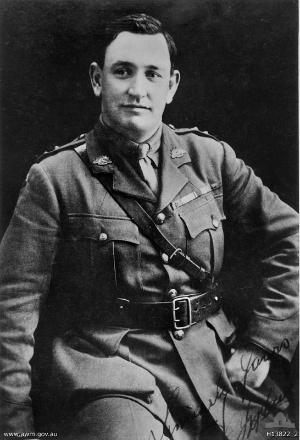 Australian-born Dominic McCarthy (1892-1975) almost did not become a soldier. He had lost 3 fingers on his hand and was thought to be unfit for combat. Nevertheless, when the First World War started, he showed the Australian Imperial Force that he had won several shooting competitions. So in 1914, the soon-to-be-legendary McCarthy joined the Australian Army.

In August 1918, only a few months before the war would come to an end, McCarthy was stationed near Vermandovillers, France. His unit took heavy fire from German machine guns. Therefore he thought it would be a good idea to storm out and attack the Germans, by himself. His extreme display of courage animated a colleague to join him and McCarthy  singlehandedly killed 22 men, captured 3 machine guns and took 50 (yes, FIFTY!) prisoners! This action was so impressive that the prisoners went up to McCarthy and patted him on the back, out of deep respect for his bravery. He eventually won the Victoria Cross, the highest Australian military honor for valor. He survived the war, then became a business man and died at the ripe old age of 83.