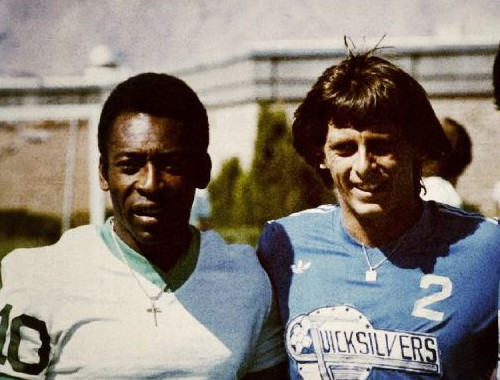 In the 1974, the Brazilian soccer player Pelé (b.1940) was the most famous athlete in the World.  In the US during these years, no one cared much for soccer. The New York Cosmos, a member of the North American Soccer League, wanted to sign the Brazilian superstar to make soccer popular in the United States. They put a $4.7 million deal on the table, which was unheard of at that time in any sport.

However, the Brazilian government was not amused. They explicitly instructed Pelé to honor his roots and keep playing in homeland. Eventually US Secretary of State Henry Kissinger, who happened to be a huge soccer fan, got wind of this situation. The legendary politician convinced the Brazilian government that Pelé would greatly help Brazil’s image and US-Brazilian relations, if he came to the US. And so,Pelé was then pressures into taking the deal and singlehandedly popularized soccer in the US. The North American Soccer League and the New York Cosmos became a sensation for a few years until a few years after Pelé retired. The whole league finally folded in 1985.

ESPN Documentary: Once in a Lifetime: The Extraordinary Story of the New York Cosmos (2006)
https://en.wikipedia.org/wiki/Pel%C3%A9

By Sylvia Joy, the wife of Brian William Joy [GFDL (http://www.gnu.org/copyleft/fdl.html) or CC BY 3.0 (http://creativecommons.org/licenses/by/3.0)], via Wikimedia Commons