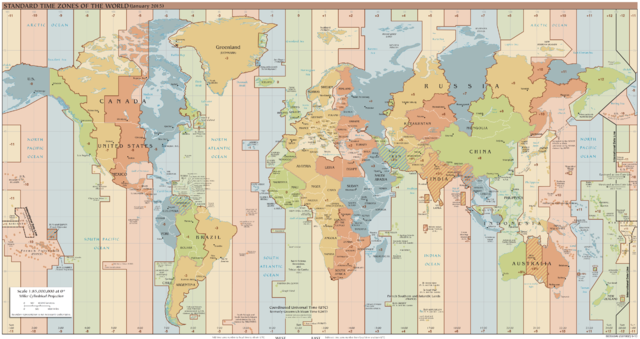 Sir Sandford Fleming (1827-1915) was a Canadian civil engineer, who became responsible for creating a railway route in Canada which should eventually connect the Atlantic to the Pacific. Also unsatisfied with the time zone issues, he developed a worldwide plan for standard time. However, outside of North America no one cared to set their clocks differently, just yet.

In 1882, U.S. president Chester Arthur requested that this matter was finally solved worldwide. Two years later, the International Meridian Conference took place in Washington D.C with 27 participating countries. It was agreed to establish 24 standard meridians of longitude from the North Pole to the South Pole. Each of those meridians is 15° (=1 hour) apart, starting with the prime meridian through Greenwich, England. Some exceptions to the rule where a few half hour zones.

Problem solved, right? Wrong! It took quite a while for all countries to adhere to the new Greenwich meridian. While Canada and the USA already adapted the time zone one year before the conference, some countries took decades. India adhered to the standard in 1906, the USSR changed its clocks in 1922, the Netherlands in 1940 and Liberia in …hold onto your seats… the year 1972!