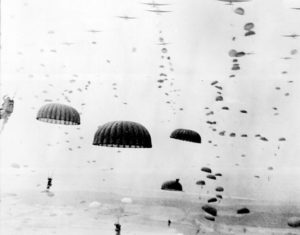 Caption: Owen J. Baggett (1920-2006) was a soldier of the United States Air Force. In 1943, in the middle of World War 2, his plane was severely damaged by Japanese fighter planes over Burma. The crew bailed out with parachutes. While Baggett was in mid-air, a Japanese fighter plane approached him. Baggett drew his M1911 pistol and fired straight at the pilot. The pilot lost control of the plane and plunged to certain death. Baggett’s feat to down a plane with a mere pistol became absolutely legendary.

By Public domain:  This image is a work of a U.S. Army soldier or employee, taken or made as part of that person’s official duties. As a work of the U.S. federal government, the image is in the public domain.