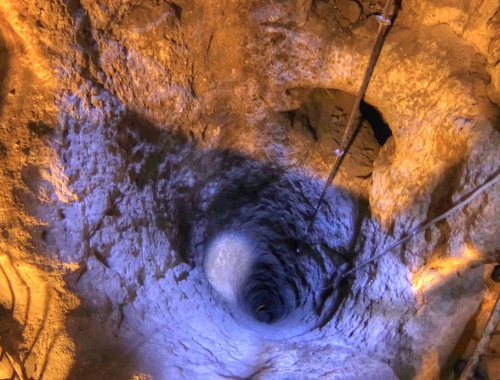 In 1969, a large underground city was rediscovered in Derinkuyu, Turkey.  It was built in approximately 800 – 700 BC and contains an intricate system of tunnels and several dozens of rooms up to 60 meters (196 ft) deep.

It is estimated it housed up to 20,000 people including lifestock at one point in time. Shown in the picture is a ventilation shaft. The city was built into volcanic rock, which is relatively soft but still firm enough not to collapse easily. The underground city was used up until the early 1900s for several purposes, such as fleeing persecution. After this, it was forgotten until the late 1960s when it was rediscovered and turned into a museum.