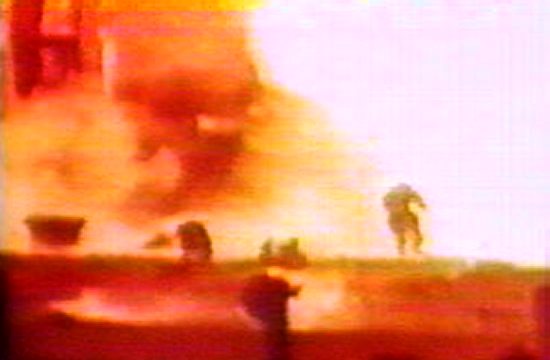 In 1960, the exploration of space was still in its infancy. Several years earlier the Soviet Union had launched the first satellite into space. The USA was very eager to catch up, which is why the Soviets were putting themselves under extreme pressure to keep their head start.

Chief Marshal Nedelin was a Russian military officer ordered to oversee the development of the R-16 missile. While not designated to shoot a man into space, it was still a very important part of the race to space domination. It was supposed to be the first true intercontinental missile and was to have a range of over 6800 miles (11,000km). Nedelin wanted to run the first successful test by November 7th (the anniversary of the Bolshevik Revolution) and encouraged the team of a few hundred people to work as fast as they could. Eventually, he would start sitting at the launch pad and yell orders to the engineers to work faster. Security precautions were completely ignored. Then, on October 24 it happened. A short circuit in the main sequencer of the R-16 set of a chain reaction which triggered the second stage engines and in turn detonated the fuel tanks. The explosion was so powerful that Nedelin and over 100 people around the missile were incinerated immediately. Some unlucky people who were further away would be poisoned by the deadly chemicals which the explosion set free and die after a few very long minutes of excrutiating pain. Coincidentally, the entire catastrophe was filmed.  Naturally, the Soviet government was embarrassed and created an elaborate cover up. Details about the Nedelin Catastrophe were made public only several decades later.