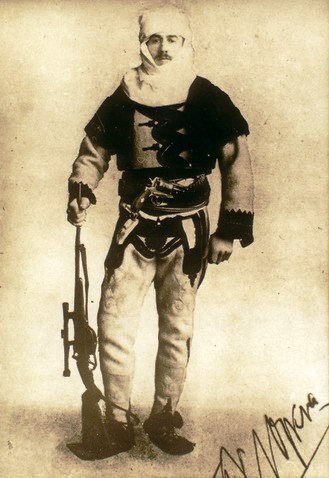 Baron Franz Nopcsa von Felső-Szilvás (1877-1933) was a self-taught aristocrat considered to be the father of paleobiology. After his sister found a dinosaur skull in the backyard of their estate in Transylvania he started obsessively studying paleontology from his library.

Nopcsa became one of the first to use dinosaur fossils to speculate upon the musculature and social habits of the species. He was also the first to propose that birds evolved from dinosaurs and he came up with what is now called the “island rule.” This rule explains the small sizes of predatory animals on islands, compared with their non-island counterparts. In addition to his contributions to paleobiology, Nopcsa contributed heavily to the field of geology and created the field of Albanian studies. Unfortunately, he suffered from an undetermined mental illness, lost all his lands and possessions after WWI, and started struggling to fund his studies. In 1933, at the age of 55, he killed both himself and the man presumed to be his lover and quickly faded into obscurity.