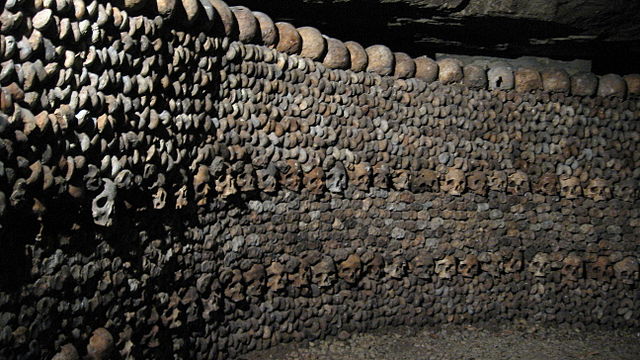 Paris, France is one of the most visited cities in the World and rightfully so. The beautiful architecture, stunning monuments and countless cultural treasures are second to none. However, a dark, yet very interesting fact of the past are the millions of human skeletons which lay below the city.

The Catacombs of Paris are a number of large underground ossuaries with countless bones and skulls neatly stacked on top of each other.  In 1774, Paris was faced with overflowing cemeteries and in the following decades the bones of several cemeteries were moved to the catacombs, which in turn used to be old mines. Around 1810, a government official decided to rearrange the bones and also decorate some of the rooms to make a giant mausoleum. A few years later, the catacombs were officially opened for the public and still are to this day.

By Djtox [Own work, Attribution], via Wikimedia Commons.